New York New York, a Helluva Town!
On October 30, 2016, Posted by Ferris and Milnes , In Uncategorized, With No Comments

Our little town blues were melting away as we boarded the plane from Heathrow to JFK Airport in New York. What lay ahead for us were nine hugely exciting days in the Big Apple as we flew across the pond for the American debut of Ferris & Milnes.

The opportunity to perform in New York originally came about through our dear friend Steve Ross, who has spent a lifetime working with the crème de la crème of show business. As well as performing around the world in his one man shows – including productions based around the songbooks of Cole Porter, Stephen Sondheim and Alan Jay Lerner – he has appeared on Broadway in Noel Coward’s play Present Laughter, and accompanied the likes of Liza Minnelli, Ginger Rogers and Ruby Keeler. It was through Steve’s belief and generosity that our American trip became a reality. Thank you, Steve, for going above and beyond the call of duty. 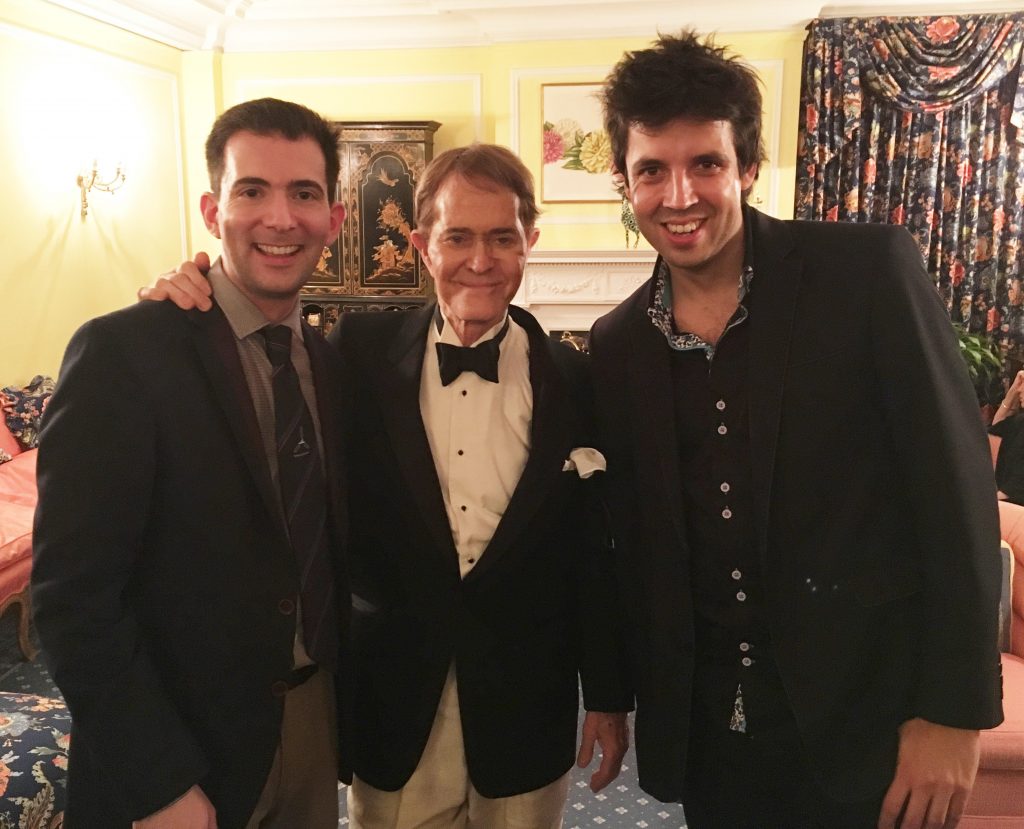 We made a number of guest appearances in shows and events around the city. Highlights included Birdland ‘Cast Party’ – where the incomparable Billy Stritch held court at the keys alongside MC extraordinaire Jim Caruso.

Then we were off to perform for the Dutch Treat Club, a New York show business institution which has existed since 1905. Illustrious former members have included Rodgers & Hammerstein, Jerome Kern, Frank Loesser, as well as Presidents Hoover, Eisenhower, Truman and Ford. We entertained the members with our Irving Berlin, Sondheim and West Side Story medleys, and then enjoyed a very interesting talk by author David Kaufman about Broadway legend Mary Martin. It was a privilege to have lunch that day with Sondra Lee, the actress who created the role of ‘Tiger Lily’ in Peter Pan with Mary Martin on Broadway in 1954, as well as the role of ‘Minnie Fay’ in the original Broadway production of Hello, Dolly! We were also delighted to see Sondra at our Metropolitan Room show a few days later. 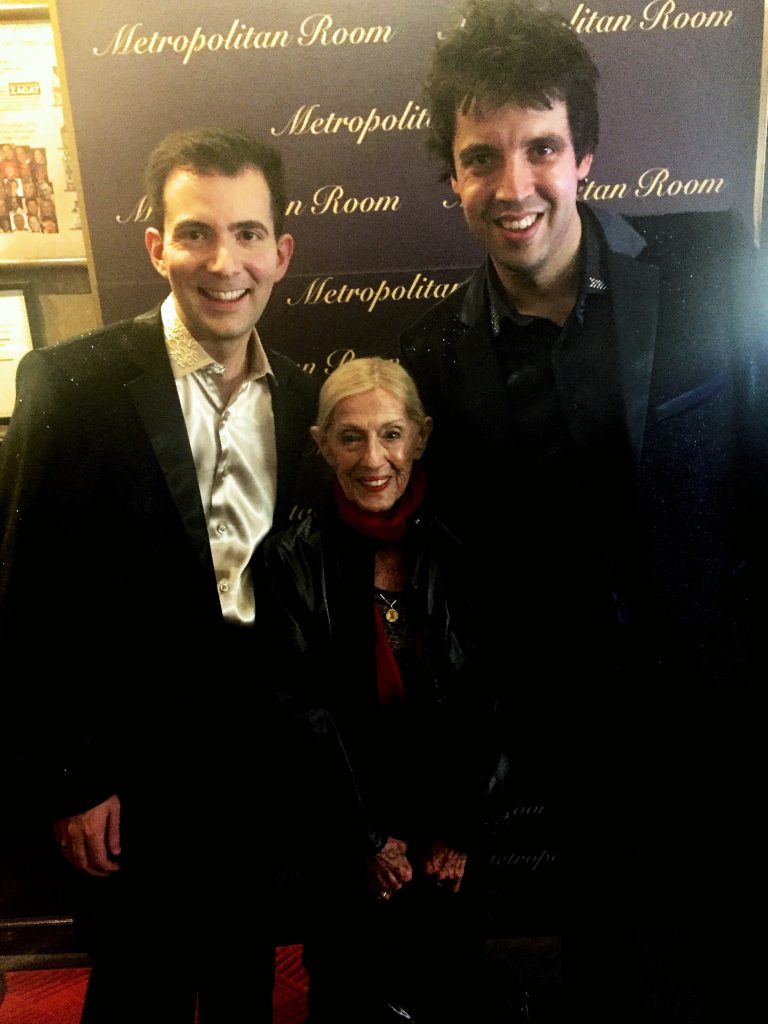 Our venture into the hallowed halls of show business history didn’t end there – the next day we were privileged to perform at another private club – former members of which included George Gershwin, Cole Porter and PG Wodehouse. Founded in 1915, an informal atmosphere has always been mandatory at the Coffee House Club, and members still abide by the original rules: 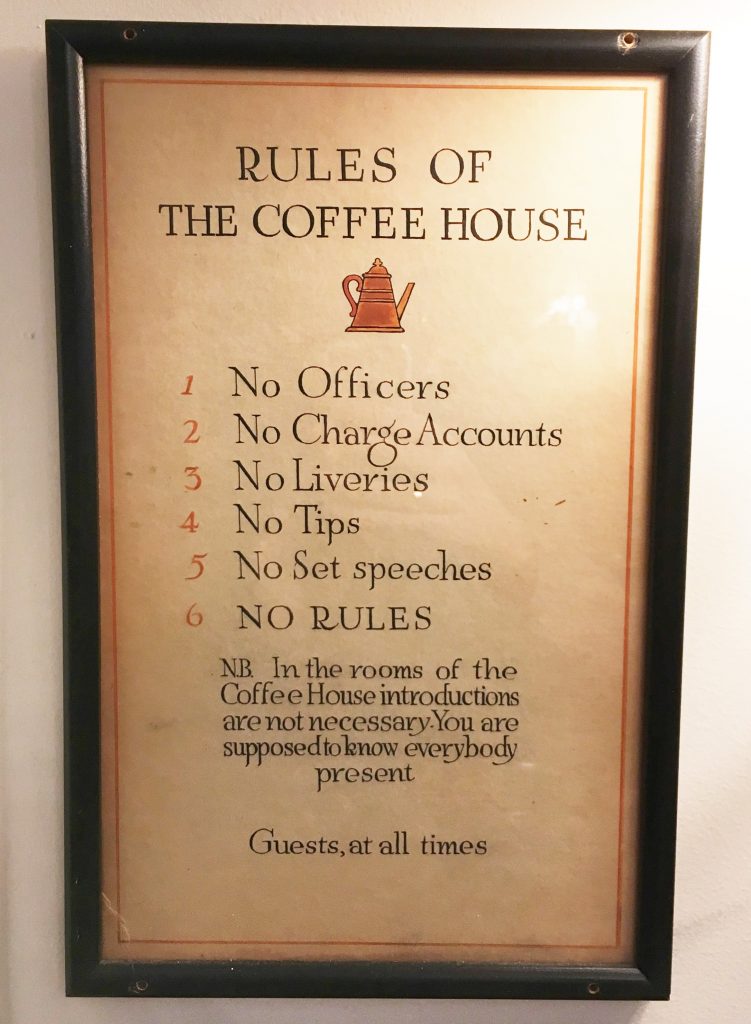 By contrast, our final guest appearance brought us right up to date to the present day – a performance and Q&A workshop with the students of the American Musical and Dramatic Academy (AMDA). For these young musical theatre students we performed our medley 31 West End Musicals In Under 10 Minutes, as well as previewing items from our Metropolitan Room show. It was a great privilege to meet both the students and staff of this vibrant academy, and we look forward to seeing them all again.

It all culminated in a great performance at the Metropolitan Room with which we were both delighted. As well as being able to perform for Steve Ross it was also a pleasure to welcome the wonderful singer and agent Zoe Tyler, legendary Broadway agent and critic Richard Seff (the man who discovered and brought together Kander & Ebb) and the uniquely talented Christina Bianco, star of Forbidden Broadway who has convulsed audiences on both sides of the Atlantic with her fantastic vocal impressions. Thank you to all who came! And thank you also to critic Alix Cohen for this terrific review. 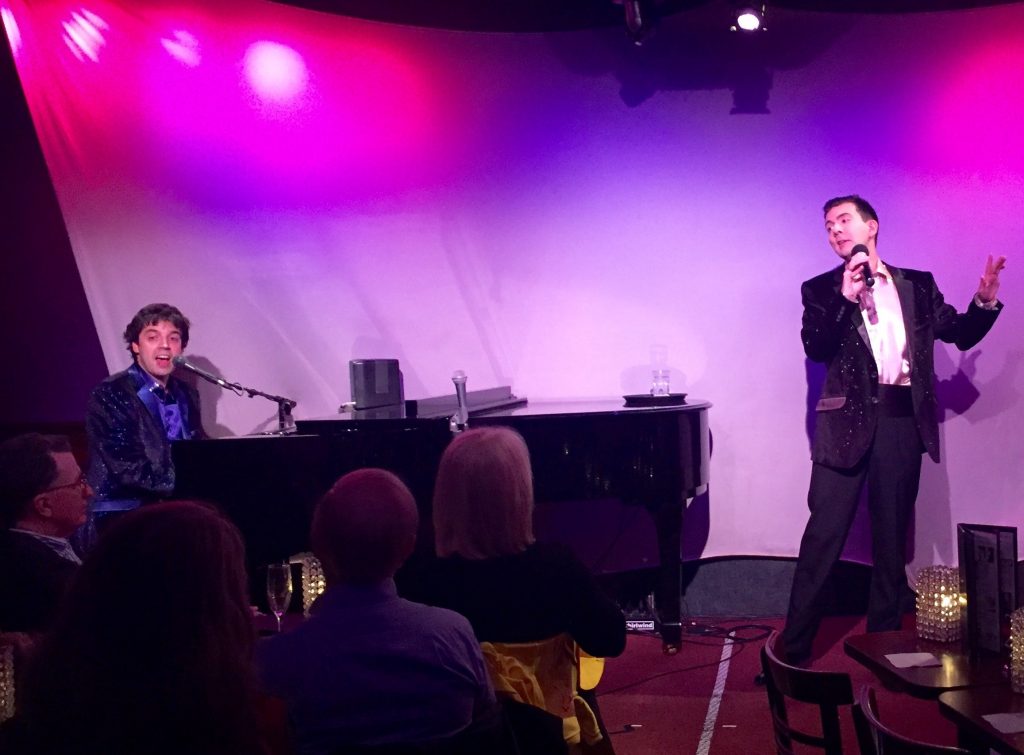 However – we were also extremely privileged during our visit to meet a man whose work has been extremely important to Ferris & Milnes – Stephen Sondheim. And to receive an invitation to the dress rehearsal of New York City Center’s production of Sunday In The Park With George was an incredible way to end our trip. Jake Gyllenhaal and Annaleigh Ashford led a remarkable cast in one of Mr Sondheim’s greatest pieces, and it was very special indeed to be able to see the show prior to its opening performance that evening – which, incidentally, received rave reviews. 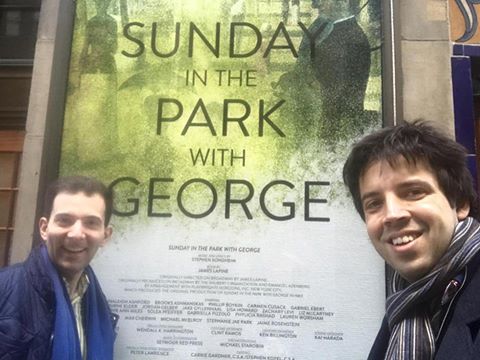 But as the curtain rose a few hours later at City Center it was time for us – in the words of ‘George’ and ‘Dot’ – to “move on” and head back to JFK. Thank you, New York, and to everyone we met there, for an unforgettable time in America.